our grandfather, a kindly and generous man, a man who lived within the law and fought the enemies of truth."
In late 1937 - early 1938, my aunt and uncle, Thelma Anne Rothmund [1911-1981] and Joseph Jefferson Smith [1909-1977] (Soapy's grandchildren), wrote to Joseph's father, Jefferson Randolph Smith III, (Soapy's son) sending him a copy of the War Cry magazine issue (October 16, 1937) that contained the story by Evangeline Booth, fourth daughter of the founder, William Booth, and how she converted Soapy Smith to religion.
Evangeline Booth is said to have arrived in Skagway in May 1898. Some of the versions have Booth going to Soapy, while others have Soapy coming to her. I am still searching for a copy of the War Cry, so I can only speak on the latter version which is utilized in the book, General Evangeline Booth of the Salvation Army, by P. W. Wilson, 1948, page 129.

Soapy Smith, who owned the saloon, was quite a celebrity. He got his name in Denver where he sold soap at the street corners. Within certain of the packages were wrapped one, five and ten dollar bills, and with this inducement he did a roaring trade. The loaded packages, however, were handed to purchasers who were confederates, and with Soapy Smith they were hunted out of Denver, finding their way to Skagway where, by fair means or foul, they lured prospectors with money on them into a condition where they could be robbed. Soapy and his gang numbering some sixty adherents were a terror to the town. He was a tall dour man and Evangeline watched him during one of her meetings as he stood listening intently to what she was saying.

One evening in their camp among the trees the Salvationist party was warned that Soapy Smith with five of his bodyguard was approaching. It was a case of firearms on both sides. "Leave him to me," said Evangeline Booth, and she met the party. Supper was over, she said, but she would be happy to give them cups of cocoa. They sat and drank the cocoa and the Field Commissioner took Soapy Smith aside. "Why don't you give up this kind of life?" she asked him, and apparently he was impressed. He said that if he surrendered to the authorities it would be death, and she spoke to him of a salvation that means victory over death. Amid the shadows of the forest they prayed together and Soapy Smith departed.

A citizens meeting was held on a long wharf at Skagway. It was decided to clean out Soapy Smith and his gang. Soapy appeared in force and there was shooting on both sides. The town surveyor, Frank Reid, standing to guard the entrance to the wharf, was killed, which was murder, and Soapy was badly wounded. He was operated on by the surgeon in hope that he might live to be hung. But he cheated the gallows. Five years later someone happened to visit his grave. It was fragrant with fresh flowers. A strange man, he had been, and loved, it would seem, by somebody. For the Salvation Army he always had had a fondness. He told Evangeline Booth that his mother had taken him to its meetings as a little boy, and he had been eager to go because they allowed him to clap his hands.

In the book, Salvation Comes to the Last Frontier, by Evan Dowling, 1986, it is claimed that Booth converted Soapy as well as two members of the Soap Gang. My father and his siblings denied Booth's story because of the numerous "errors." One of the big errors was that Soapy’s mother took him to Salvation Army meetings when he was young. Although my father was going by the family history as he had learned it from his grandmother, Soapy's widow, his argument makes perfect sense considering the Salvation Army did not come to the United States until 1880, three years after Soapy’s mother had passed away.
Back to the letter (artifact #82), ironically, Jefferson had worked for Evangeline Booth as her publicity representative in St. Louis. He adds, "but, dear children be not alarmed as all the allegations are untrue," touching on some of the untrue stories Evangeline Booth told, as well as comparing his father to that of the Salvation Army leadership. His last paragraph is my favorite, even though it shows 100% support for Soapy, which is common in children of famous American bad men.

I have always spoken to you of your grandfather with deep reverence, and I do the same when I discuss his life with your brothers and sisters, and with my dear father's grandchildren. I want you to believe, as I have often told you, that your grandfather, a kindly and generous man, a man who lived within the law and fought the enemies of truth. I want you to continue to believe that he was everything a good man should be, despite allegations by even so great a woman as Miss Evangeline Booth, head of the Salvation Army, and by a widely advertised writer of a book laveled[sic]: "How to Win Friends and Influence People."

"There is a very easy way to return from a gambling house with a small fortune: go there with a large one." 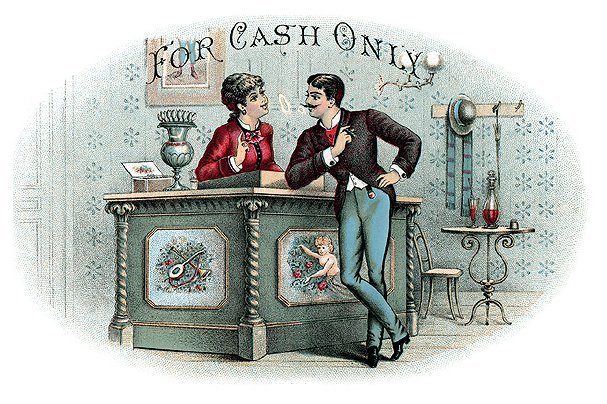