You'll listen to the tricks of Smith
And how he won the duel
With Reid, his greatest enemy,
Then died from wound more cruel.

For as Reid's bullet missed Jeff Smith
Someone fired a shot
Which found its way to "Soapy's" heart-
The killer they knew not.

From: The Story of the Tour on
the Skagway Alaska Street Car, 1938
Posted by Jeff Smith at Sunday, August 31, 2008 No comments: 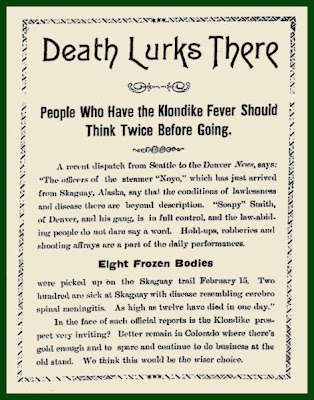 I have been working on the family tree using Family Tree Maker (16) and am proud to announce that there are 655 individuals listed that date back as far as 1621. This makes it a little easier when people write in asking if they are related to Soapy.

When in Fairbanks, Alaska... 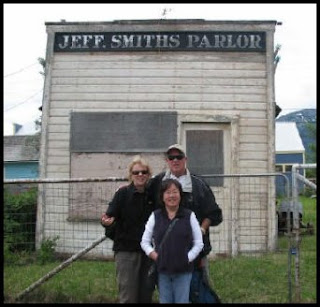 Lee Pharm. at Skagway showing the current
condition of Jeff Smith's Parlor.
It never ceases to amaze me how people from my past pop up. Some fifteen years ago I worked at Lee Pharmaceuticals in California. It was an interesting job, my boss was great and I made friends with people in different departments and got to drive a golf cart around to visit them! Alas I messed it up extending a vacation trip.
In conversations with my boss and his wife I often told stories of Soapy and showed them the shell game. Fifteen years later they dropped anchor in Skagway, Alaska and heard stories of Soapy all over again. The wife picked up the summer edition of the "Skaguay News" and saw the front page story I wrote on the gunfight on Juneau Wharf in which I exposed that Soapy was killed by Jesse Murphy. She saw my website address listed with the story and figured I had to be the same "Jeff Smith" from Lee Pharmaceuticals. It was nice to hear from her.
Posted by Jeff Smith at Monday, August 18, 2008 No comments:

Here is a link to view a 1941 trailer for the film Honky Tonk, based on the book, The Reign of Soapy Smith. TRAILER
Posted by Jeff Smith at Saturday, August 02, 2008 No comments: