Is this Soapy Smith and his brother Bascomb 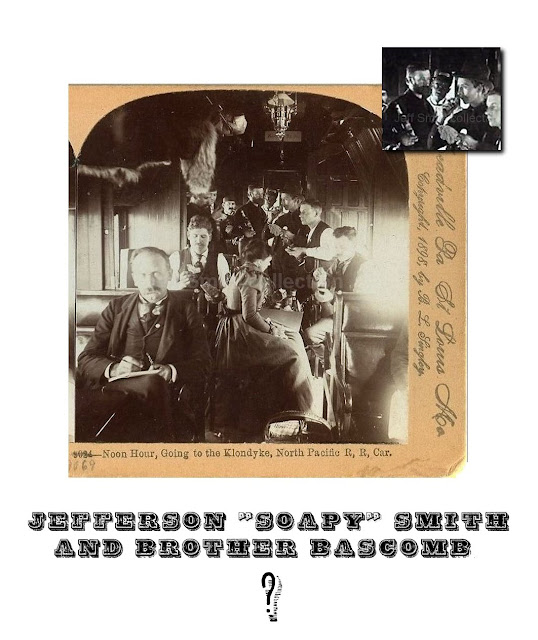 s this SOAPY AND BASCOMB?

I cannot find my source, but long ago I found an author who made the claim that this stereo-card shows bad man "Soapy" Smith and his younger brother Bascomb aboard a Northern Pacific train "heading to the Klondike." The train is most likely heading to Seattle, Washington where those heading to Alaska and then the Klondike, would board a steamer.

So is this Soapy and Bascomb? It could be. It sort of looks like it could be them, and Soapy did go to Washington numerous times, but unfortunately, there is no provenance.

"It is popularly believed Reid killed Smith, but those claiming to know assert Murphy fired the fatal shots."

1789: U.S. Congress authorizes the office of Postmaster General.
1862: U.S. President Lincoln issues the preliminary Emancipation Proclamation. It states that all slaves held within rebel states would be free as of January 1, 1863.
1886: Famed lawman Bat Masterson has an altercation with a man named Bagsby inside The Exchange saloon in Denver, Colorado. Masterson strikes Bagsby, who draws a pistol and shoots Masterson in the leg. Neither men wish to make a complaint and no one is arrested. Masterson is a friend of bad man “Soapy” Smith’s.
1891: Sak, Fox, and Potawatomi lands are open for settlement in Oklahoma Territory. 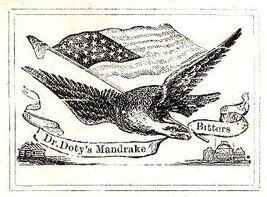 Posted by Jeff Smith at Tuesday, September 22, 2015 No comments:


1883: 14-year-old Bascomb Smith, younger brother of bad man Soapy Smith, tries to burn down the Avenue Hotel in Belton, Texas, because they would not hire him.


There is no other new information regarding Bascomb trying to burn down the Avenue Hotel in Belton, Texas, but I did locate a nice drawn map and a photograph I do not recall seeing in the past.

The map below shows all of Belton in 1881. The cropped portion at the top of this article shows the location of the Avenue Hotel.


The yellow fever outbreak in Jacksonville, Florida scared the region severely. In 1888 medical science had not found the reason or cure for yellow fever. The fever is carried by mosquitoes, but this was not known until 1901. The mosquito problem in Florida was not eradicated until the 1950s. In 1888 it was believed that the fever was air-born and that the setting of tar fires might burn away the germs floating around. People in Jacksonville even took to shooting in the sky to kill the germs. Of the 5,000 cases, 427 people died.

The detailed history of "Soapy" Smith shows that he was very well-known for his charitable works. In this particular time of need he gave $10 to a fund, which is equivalent of forking over $332.06 today. You can read more about the event at the website 500 Years of Discovering Florida, 1888 Epidemic in Jacksonville.

"I never knew anything about Jeff Smith only what my husband had said [about] his being the king of the gamblers, and that naturally made me afraid of him. Well, you remember that night when Parson Uzzell was giving out loaves of bread to all the hungry people? I went to the [People’s] Tabernacle one night, but I got there too late. Every loaf of bread was gone, and not a penny in the house. I don’t know what I was doing only standing alone when a gentleman came close up to me and … pushed a piece of paper in my hand, and before I could even talk, he said: Take that, lady, it will get you all the bread you want."

1858: Camp Walbach is established to protect immigrants traveling through Cheyenne Pass between present day Nebraska and Wyoming.
1875: Cruz Vega a Mexican mail carrier helped waylay and murder the Reverend F. J. Tolby as the minister was riding between Elizabeth and Cimarron, New Mexico Territory. Cruz is arrested but released for lack of evidence. One month later, Reverend O. P. Mains persuaded bad man Clay Allison to force a confession from Cruz, which he did on October 30, 1875. Cruz implicated Manuel Cardenas and then Cruz Vega was hung from a pole. On November 10th masked men stormed the jail and shot Cardenas to death.
1877: Lincoln County War combatants, Dick Brewer, Charles Bowdre, and Doc Scurlock arrive in Las Cruces, New Mexico Territory with warrants for the arrest of Jesse Evans and his gang.
1878: A stagecoach is robbed by unknown outlaws near Cold Springs, Wyoming.
1881: Chester A. Arthur becomes the 21st president of the U.S. President James A. Garfield had died the day before.
1883: 14-year-old Bascomb Smith, younger brother of Soapy Smith, tries to burn down the Avenue hotel in Belton, Texas, because they would not hire him.
1884: The Equal Rights Party is formed in San Francisco, CA.
1888: Soapy Smith donates funds towards victims of a yellow fever epidemic in Jacksonville, Florida.