Please know that I have nothing against the Salvation Army and their work. As a historian I just simply do not believe most of the story about the supposed meeting between Soapy Smith and Evangeline Booth in Skagway, Alaska. All we have to go on is her word and some of what she said is suspicious to me.

So what brought this on? A write-up by W. Winston Skinner in the Times-Herald.com

There is a gunslinger from Coweta County whose final days have a link with the Salvation Army.

Jefferson Randolph “Soapy” Smith II was born to a prominent Coweta family in 1860 and was shot to death in Skagway, Alaska in 1898.

The local center is celebrating Salvation Army Week — May 9-14 — with a variety of activities. On Thursday, Majors Larry and Evelyn Repass, retired Salvation Army officers, will be at the store to answer questions about the Army and its history.

In addition to the stories about Soapy Smith, the Repasses will share why did baseball hero Ted Williams hold a grudge against the Salvation Army and why Denzel Washington often volunteers his support for the organization. ...

The story of Salvation Army leader Evangeline Booth, fourth daughter of the founder, William Booth, meeting with Soapy Smith did not make the pages of my book. The reasons had to do with space limitations, too many different versions, and no convincing argument that any of them were completely true, meaning I would have had to publish them all in order to get the correct one in print.

One true story that all the Booth stories did not tell, was that the Salvation Army  had attempted  to contact Soapy once before in Denver 1890. This story at least has some form of record, even if only the newspapers. The following comes from my book, Alias Soapy Smith.

Reform ordinances had forced all saloons in the city to close on Sundays. On one Sunday, February 17, 1890, Jeff hung a sign on the door of his club and the News noted it:


Down Among the Dives.

The door of the Tivoli saloon, which is always a favorite resort with a certain class, did not yield to the pressure which many brought to bear against it [not to observe the Sabbath]. On the panel was pasted a notice with the words: “Gone to church; to-day is Sunday.”

Major French, commander of Denver’s Salvation Army, read about the sign and felt Jeff might be coming around to a religious way of thinking. Taking the initiative, the major led a march to the corner of Market and Seventeenth and presented Jeff with the opportunity to look good in a blue and red uniform. A reporter described the event:

The army came to a halt just in front of his [Jeff’s] place, and sent up “hallelujahs” enough to wake up…, and this song was sung as an inducement to Soapy to join the band, to the tune of “Climbing Up the Golden Stairs.”

“Soapy” would not bite even at this, but the little army received a few recruits from the crowd on the corner and marched happily to their hall on Lawrence street.

Evangeline Booth arrived in Skagway in May 1898. Some of the versions have Booth going to Soapy, while others have Soapy coming to her. The latter version is utilized in the book, General Evangeline Booth of the Salvation Army, by P. W. Wilson, 1948, page 129.

Soapy Smith, who owned the saloon, was quite a celebrity. He got his name in Denver where he sold soap at the street corners. Within certain of the packages were wrapped one, five and ten dollar bills, and with this inducement he did a roaring trade. The loaded packages, however, were handed to purchasers who were confederates, and with Soapy Smith they were hunted out of Denver, finding their way to Skagway where, by fair means or foul, they lured prospectors with money on them into a condition where they could be robbed. Soapy and his gang numbering some sixty adherents were a terror to the town. He was a tall dour man and Evangeline watched him during one of her meetings as he stood listening intently to what she was saying.

One evening in their camp among the trees the Salvationist party was warned that Soapy Smith with five of his bodyguard was approaching. It was a case of firearms on both sides. "Leave him to me," said Evangeline Booth, and she met the party. Supper was over, she said, but she would be happy to give them cups of cocoa. They sat and drank the cocoa and the Field Commissioner took Soapy Smith aside. "Why don't you give up this kind of life?" she asked him, and apparently he was impressed. He said that if he surrendered to the authorities it would be death, and she spoke to him of a salvation that means victory over death. Amid the shadows of the forest they prayed together and Soapy Smith departed.

A citizens meeting was held on a long wharf at Skagway. It was decided to clean out Soapy Smith and his gang. Soapy appeared in force and there was shooting on both sides. The town surveyor, Frank Reid, standing to guard the entrance to the wharf, was killed, which was murder, and Soapy was badly wounded. He was operated on by the surgeon in hope that he might live to be hung. But he cheated the gallows. Five years later someone happened to visit his grave. It was fragrant with fresh flowers. A strange man, he had been, and loved, it would seem, by somebody. For the Salvation Army he always had had a fondness. He told Evangeline Booth that his mother had taken him to its meetings as a little boy, and he had been eager to go because they allowed him to clap his hands.

In the book, Salvation Comes to the Last Frontier, by Evan Dowling, 1986, it is claimed that Booth converted Soapy as well as two members of the Soap Gang. My father and his siblings denied Booth's story because of the numerous "errors." One of the big errors was that Soapy’s mother took him to Salvation Army meetings when he was young. Although my father was going by the family history as he had learned it from his grandmother, Soapy's widow, his argument makes perfect sense considering the Salvation Army did not come to the United States until 1880, three years after Soapy’s mother had passed away. All we have is Booth's word on the story, and just exactly what her actual word on the story is not really known to me as I have yet to see a source. 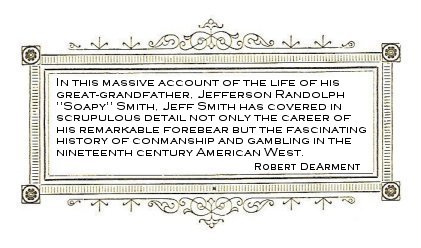