Jay Smith Hartzell, son of Judith Smith and great-grandson of Jefferson “Soapy” Smith passed away on July 24th 2008 from complications of lung and brain cancer. He was 63. He will be missed.

I never ceased to be amazed at who finds our website and writes in. Today was no exception. The great-grand-daughter of U.S. Deputy Marshal James Mark Rowan wrote me looking for information on him. Rowan is the lawman shot dead along with McGrath by bartender John Fay on February 1, 1898 in Skagway, Alaska. The vigilante "Committee of 101" gathered up a mob to hang Fay but Soapy hid Fay while he and his men held off the unruly mob at gunpoint. Fay was eventually promised safe passage and handed over to the U.S. Commissioner to be taken to Sitka to await trial. Soapy was in favor of law and order. As it turns out the court system actually worked to his advantage because it was so slow. Most miners were not willing to wait around for a trial and thus the Soap Gang got off more times than not.

My name is Renee Rowan and I am the great granddaughter of Marshal James Mark Rowan. I have reviewed your website and was wondering if you had any information about my grandfather, James Mark Rowan and his mother, Bernie Rowan.

I have been tracing my family tree and have not been able to access information re: Bernie Rowan. It is my understanding that she may have given her son to the Catholic Church. I would imagine that it was very difficult for a woman, with a small child, to make a life in Alaska, during that time.

I am currently in touch with many individuals in Skagway, as well as with the US Marshals, to gain information re: James Mark Rowan, the great grandfather and the grandfather.

I hope that you can assist me in my search, as you may hold information in primary source documents that will provide my family with information.

On July 21, 1878 famed Texas outlaw, Sam Bass is shot and killed during a foiled bank robbery attempt in Round Rock, Texas.

17-year-old Jefferson Randolph ("Soapy") Smith and his younger cousin Edwin Smith witness the shoot-out. At that moment Edwin decided not to follow his older cousin into a life of crime.
Posted by Jeff Smith at Monday, July 21, 2008 No comments:

Here it is gang! Video of the recent Wake at the Magic Castle. Whit Haydn did a fantastic job of showing the hi-lites of the memorable evening. Enjoy! 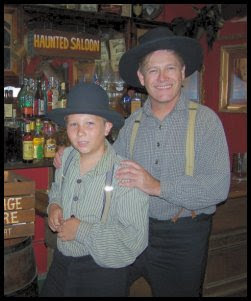 Here is a photo of my son Jefferson Randolph Smith (gg-grandson of Soapy) and myself on the stage of the Haunted Saloon internet show in which Jefferson was interviewed. He had a great time and so did I. My on-going goal is to get my two children interested in the history of Soapy...so they'll buy my book!

The reason for going to the show was to support friend, Keith "Grifter" Cobb who had been invited to the show by producer Terry Clanton. Keith had come all the way from Chicago out to California to attend the Soapy Smith Wake. Now that is a fan! Below is Keith, beautiful friend Holly, Jefferson and the stunning Christy, aka "Sadie." 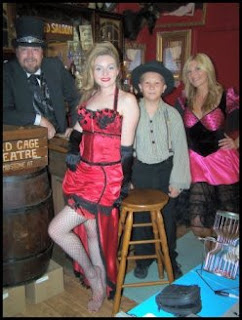 Soapy Wake at the Magic Castle 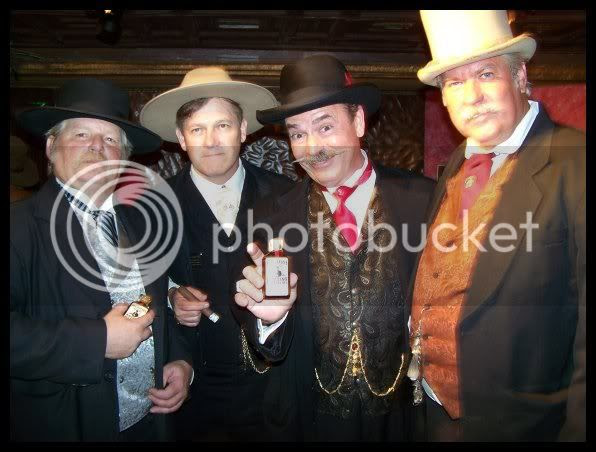 This year’s Soapy Smith Wake was a complete success. It was larger than the previous year and shows no signs of tapering off in size. There were several comments made to me that the downstairs area where we held the function for the last four years was no longer large enough and that an expansion was in order.

I arrived with three friends at 3:30 in the afternoon to help Phil Gessert set up the gambling room he graciously donated to operate utilizing his wonderful collection of antique tables and equipment.

Everyone paid a $5 entrance fee and received a Soapy brochure of events for the evening and a short history of Soapy Smith. They also received $100 in “Soapy money” specially made for the 110th. Specially made playing cards manufactured by Shay Maxwell packaged with a Soapy Smith 110th theme. Reproductions of the July 15, 1898 Skaguay News with the headlines of the Soapy Smith/Frank Reid confrontation. anniversary, in which to gamble at the games with. Upon entering the downstairs main hub of Soapy activity they were greeted with “Welcome to Jeff Smith’s Parlor, Skagway.” A table sold a nice variety of Soapy related souvenirs including t-shirts and tote bags with a design commemorating the 110 anniversary of the “Gunfight on Juneau Wharf.” There were garters with a small Soapy picture button. Soapy soaps with specially manufactured wrappers for the 110

Tables of short cons like the shell game and fast and loose were placed strategically around the 3 floors of the Magic Castle for the attendees to play using their Soapy Money. It was fun watching people fall for the confidence swindles and lose their Soapy money.

Attendees gambled in Jeff Smith’s Parlor gaming hall as Dave Bourne and his band played period songs on their instruments. It felt like I had been transported back in time. In the gambling room Phil Gessert brought period games full size roulette table 21, faro, craps, wheel of fortune, chuck-a-luck and horse racing game wheel. Guests were invited to play gamble and at the end of the night prizes were given out to the winner players and dealers who had collected the most money. The room was packed full and went on playing well after the contest had ended.

I will post some pictures and links about the Wake as they come in. My camera did not do so well.

Chef Anton once again graced us with his trick pool show. At 9:00 pm I went up and gave a short talk and gave a narrated walk-through on the details of the gunfight using four volunteers. At 9:15 I gave the toast,

“He left his mark on this world
and from his deeds we learn not to be one.

After the toast there was a costume contest and an auction which included a shadow box that contained an actual sliver of wood from the original Soapy Smith grave marker, books, framed newspapers, posters from past events, along with magic items, silver shell sets, private tutoring lessons from Magician Whit Haydn and pool lessons from Chef Anton, autographed posters from famed magician Mark Wilson, etc.

Last year Phil Gessert was able to load his equipment back into his truck right within minutes of the ending of the event. This year, however, had shown such an increase in attendance that we all had to wait for about 1-1/2 hours to get the truck loaded because the amount of cars leaving. I did not get home until about 3:30 am and I was beat…but found myself planning in my head what to improve on for next year’s event. 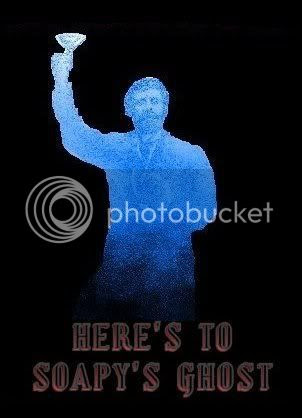 I found this video of engine #41 that I thought some of you might enjoy if you have never seen the train in operation in southern California.
Posted by Jeff Smith at Monday, July 07, 2008 No comments:

Email ThisBlogThis!Share to TwitterShare to FacebookShare to Pinterest
Labels: Colorado

Through the website we have found family members...or more properly, they have found us! Today, Elizabeth Moriarty wrote Jeff. They may be meeting for the first time at the Wake on July 12.

I've been meaning to write to you for some time, but with July 8th coming up, now seemed like a good time. I'm Soapy's daughter's (Mary Eva) son's (Michael Moriarty) son's (Jim Moriarty) daughter, which I believe makes us second cousins once removed. My fiance and I moved to Los Angeles a couple of years ago after I finished law school (I grew up in Milwaukee). We made a trip up to Skagway a few years ago but, unfortunately, couldn't be there for the wake, so I was pretty excited when I noticed that you have been holding a wake at the Magic Castle for the last few years. We would love to meet you there if possible next weekend. Anyway, I hope you and your family are doing well, and even if the Magic Castle thing doesn't work out, perhaps we can meet up at some other event some time soon.

We hope to see her and her fiance at the Magic Castle. Jeff sent her membership in Friends of Bad Man Soapy Smith.
Posted by Jeff Smith at Sunday, July 06, 2008 3 comments:

I came across this old postcard on-line of Denver and Rio Grande engine #41. This engine shipped supplies and passengers to Creede, Colorado during the silver rush of 1892. It is probable that Soapy and the Soap Gang were passengers in cars pulled by this very engine. This postcard dates from the 1950s when the engine was purchased and put into use at Knott's Berry Farm in Buena Park, California. That old engine is still pulling park visitors around the park but it is only a matter of time before it is mothballed. Both my children have rode the train and I am trying to get special permission to get a private tour of the engine.
Posted by Jeff Smith at Friday, July 04, 2008 2 comments:

Email ThisBlogThis!Share to TwitterShare to FacebookShare to Pinterest
Labels: Colorado

Billy the Kid and Soapy Smith

While editing my book this afternoon I ran into some spelling differences in one of Soapy Smith's long time attorney's, Edgar Caypless. I googled the name and found a connection to Billy the Kid of all things.
Caypless had defended bunco men in Denver as early as 1883. He defended Soapy in July of 1889 in an assault to murder case in which Soapy nearly killed the Rocky Mountain News editor, John Arkins. Caypless defended Soapy and the Soap Gang all the way up to the very end..literally. It was Caypless who defended the "Big Four" Soap Gang members for the robbery of miner John Stewart which directly caused the shootout that resulted in Soapy's demise in Skagway, Alaska on July 8, 1898.
So what does this have to do with Billy the Kid? It was Caypless who Billy was trying to hire in 1880-81 to defend him just weeks before he murdered officers Olinger and Bell. Caypless had been outlaw Cave Rudabaugh's attorney and suggested him to Billy. The attorney would have defended Billy had he been successful in gaining possession of Billy's horse to sell off for expenses but the woman caring for the horse would not give it up.
Jeff Smith
Source:
1.)Billy The Kid: A Short and Violent Life, by Robert Utley, University of Nebraska Press, 1989.
2.)Skaguay News, December 9, 1898.
Posted by Jeff Smith at Friday, July 04, 2008 No comments: