e's just struck old Ellie Perkins for $5."
Though not directly related to the story of Soapy Smith, this Denver Republican article is a great example of one method the monte tossers had of extracting funds from victims, even from those that don't make bets on the three-card monte game. The sharpers simply move to "plan B."
I am not familiar with a confidence man named Bill "Missouri Bill" Keyes, or even whether it is a real individual, but I hope to find out soon.
Below is the transcribed article.
THREE-CARD MONTE MEN.
―
How a Fly Capper, Under the Guise of a Clergyman, Roped in Eli Perkins―A Lie in Two Acts.
―

The reason why I urge upon every one, however smart, not to put too much confidence in his own smartness, will be seen further on. Yesterday I had to wait several hours at Monmouth, Illinois, a station on the Chicago Burlington and Quincy road. Monmouth has been frequented by three-card monte men for years. I have always known it, have often seen them there, and have often written about them. Well, yesterday they were there again. One of them, with a Canada Bill dialect, wanted to show me some strange "keerds" that he got in Chicago.
"What were you doing up there?" I asked, knowing that he was a three-card monte man and feeling an interest in his modes.
"Me and pap," he said, "took up some hogs. We took up a pile of 'em an' made a heap; but pap he got swindled by a three-card monte man. Got near ruined. But I grabbed the keerd, and I'll show you how they done it."
"Never mind, boy," I said; "I know all about it. I know the whole racket. I'll keep quiet, mind my own business and let you try your monte game business on someone a little more fresh."
The monte-boy saw at once that I was posted, and soon turned his attention to a good-looking, young and innocent clergyman in the depot. In a few moments I saw that the innocent clergyman had become deeply interested. His interest grew as he watched the cards. There were three ordinary business cards.
"I believe I can tell which card has Willowby and Hill on it," said the innocent clergyman.
“All right - but try it," said the monte man, flopping them about.
“There, that's the one,” said the clergyman, smiling.
Sure enough he was right.
"I don't see how your poor father could lose all his money at such a simple game as that," said the clergyman. "why your eyes can see the card all the time."
"Suppose you bet $5 that you can tell," suggested the monte man.
"All right; I'll risk it," said the clergyman, "though I don't like to win money that way."
The card was turned, and of course the poor, unsuspecting clergyman lost. Again he tried it, hoping to get his $5 back, bit lost again. Then he put up his last dollar and lost that. Then, seeming to realize his situation, he put up his hand to his head and walked out of the depot.
“To think,” he said, “that I, a clergyman, should get caught at this game. Why, I might have known it was three card monte. I've No respect for myself," and he wiped his eyes in acute condemnation.
"Why don't you complain of the scoundrel?" I said.
"I would, but I'm a clergyman, and if they should hear of my sin and foolishness in Peoria, I would be ruined. My poor family would suffer for my sins."
"Then I'd keep quiet about it," I said; "but let it be a lesson to you never to think you know more than other people."
"But they've got my last dollar, and I want to go to Peoria. I must go there to preach on Sunday," said the innocent suffering man.
"Can't you borrow of some one?" I asked.
"No one knows me, and I don't like to tell my name here after this occurrence," said the poor man; half crying.
"Very well," I said, "hand me your card, and I will let you have $5, and you can send it to me at the Palmer House, Chicago, when you get to Peoria," and I handed the poor man the money.
A moment afterward I spoke to the agent at the depot about the wickedness of these monte men, told him of how I had to lend the poor clergyman $5 to get home.
"And you lent him $5?"
"Yes, I lent the poor man the money."
"Well, by the great guns!" and then he slung his hat and yelled to the operator:
"Bill, you know that ministerial- looking man around here."
"You mean the capper for the three card monte men, don't you? Bill Keyes-Missouri Bill?"
"Yes."
"Well, by the Great Guns he's the best man in the whole gang! He's just struck old Ellie Perkins for $5. It does beat me what blankety, blankety fools them darned newspaper men are."

"The urge to gamble is so universal and its practice is so pleasurable, that I assume it must be evil." 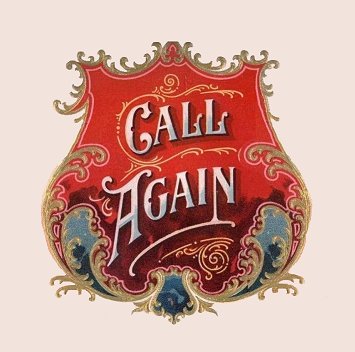