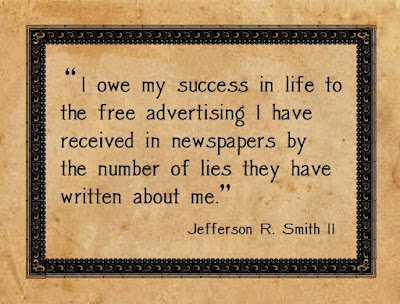 Discovered in an edition of the Alaska Mining Record, April 5, 1899.


The sensational press of the east are now engaging in some real pipe dreams of their own, and allow a column or two of Canadian and American fights on the Atlin and Porcupine border to creep into their paper. One good has resulted from this, and that is, as Soapy Smith said, “I owe my success in life to the free advertising I have received in newspapers by the number of lies they have written about me.” So it is with Alaska. The tales of wild reckless life told in papers, has been the cause of many wealthy young fellows, coming to Alaska, to become a Wild Bill, but thank God these terrible fellows have been separated from their money by a bloody game of craps, and are now on the hog train going east, or among the strikers on the Skaguay railroad.

Back in those days I was debating a lot with Wyatt Earp and Tombstone fans so this was is not only interesting, I admit that I was motivated to create it as a point to make with the Earp historians and fans.

I knew that Wyatt Earp was not well-known until the 1929 biography. I guessed correctly that between 1860-1929 that Soapy Smith was more well-known across the US than Wyatt Earp was. On a Tombstone history forum, one of my friends posted a Google newspaper archive bar graph for "Wyatt Earp" between the years 1880-1970. It gave me the idea of making a bar graph for Soapy in the same time period. I was not surprised to see that my theory was right.

The top two graphs cover larger and smaller city newspapers across the United States that were available online. Today, ten years later, there is a lot more newspapers available online and it might be interesting to see how different the graphs would look.

"An enterprising showman in Denver is advertising a wax impression of the face of Soapy Smith, the late, who was killed in the boots he wore at Skaguay, Alaska. Great paper signs on the windows of the place where the exhibition is given announce in flaring headlines “Jefferson Randolph Smith, the hero of many encounters.” The show is being given on the ground which Smith himself traversed almost daily previous to getting into his fatal trouble."

1847: John C. Fremont, the famed "Pathfinder" of Western exploration, is appointed governor of California.
1866: Everett Barney patents the metal screw, clamp roller skate.
1869: Lincoln County, New Mexico Territory is established with Carrizo as the county seat.
1878: Four civilians are killed in Indian raids in Limpia Canyon and Mason County, Texas.
1878: The silver dollar begins production as legal tender.
1883: The U.S. Civil Service Commission is established as the Pendleton Act goes into effect.
1890: Bad man Harris Austin is hung in Fort Smith, Arkansas for the shooting murder of Thomas Elliott in the Chickasaw Nation (present day Oklahoma) May 25, 1883. Austin remained on the run until he was captured by Deputy Marshal Carr in April 1889.
1890: John Billee and Thomas Willis hang for 1888 murder and robbery of W. P. Williams, whom they buried in a ravine in the Kiamichi Mountains, Oklahoma Territory.
1896: The first five-player college basketball game is played in Iowa City, Iowa.