What Are the Odds of Drawing That Card?

uited Science: What Are the Odds of Drawing That Card?

This is probably what Soapy did. He was ahead of his time AND he did it in his head. :)


Suited Science: What Are the Odds of Drawing That Card?


Introduction
Have you ever been playing cards and wished you could use psychic powers to draw the card you wanted? You may not be psychic, but you can still have the power of probability on your side. In this activity you'll investigate the probabilities of drawing specific types of cards from a deck. You'll discover how math can help you avoid the dreaded phrase, "Go fish!"

Background
When you draw a card from a deck, you have a certain chance of getting a specific type of card, such as a spade or face card, or one particular card, such as the queen of hearts. Consider the game "Go Fish" with a regular card deck. The goal is to get the most four-of-a-kind sets by asking your opponent for matching cards or by drawing them from the deck. To win, you can rely on chance or you can increase your probability of getting matching cards, but how?

By understanding how chance is related to math, you can play with a winning strategy. For example, if you have three kings and one queen in your hand and it's your turn to ask for a card, which one should you ask your opponent for? You might think you should ask for a king, but it's actually better to take a queen! Why? Because you have a better chance of getting it. There are four kings and four queens in the deck, and with three kings and one queen in your hand, there's one king and three queens left. This gives you only one chance to get a king, but three chances to get a queen out of the remaining cards.

Preparation
• Count the cards in the deck and make sure it is complete. (There should be 54 cards total.) Take out the two jokers. Shuffle the deck three times and set aside.
• Pick four types of cards to investigate, such as a color, suit, number or face card, and a specific one. For example, you could investigate red cards, spades, kings and the queen of hearts.
• Draw a table to in which to record your data. Make a column for each card type you'll investigate. In the first row write how many of that type of card are in the deck. For example, there are 26 red cards in a deck, 13 spades, four kings and one queen of hearts. Make 10 rows below this one for the 10 trials you will be doing.

Procedure
• Decide which type of card you will investigate first. Draw cards from the top of the deck and flip them over one at a time, counting as you go, and stop when you see that type of card. How many cards did you draw until you reached that card? Write down the answer in your table.
• Shuffle the deck again and repeat this process, flipping over the cards and looking for the same type of card. How many cards did it take this time? Write down the answer in your table. Repeat this for a total of 10 times for one type of card.
• Repeat this process for each of the four types of cards you picked to investigate. This means that you will have looked for each type of card a total of 10 times.
• Calculate the average number of cards you drew to reach each type of card. Label the last row in your table "Averages" and write them in this row.
• Which types of cards were the easiest to draw? Which were the most difficult? How do you think the chances of drawing a card relate to the total number of that card type in the deck?
• Based on what you saw in this activity, how do you think probability can help you choose the right strategy in a card game?
• Extra: A more advanced way of showing the results of your experiment would be to make histograms, which are a type of graph to show distributions. Try making a separate histogram for each type of card you tested by graphing the number of cards drawn for each trial separately in a bar graph. When all of the bars are lined up next to each other, what does the overall shape of the distribution look like?
• Extra: The probability of drawing a particular type of card also depends on the number of cards drawn each time. Try doing this activity again but draw samples of three, five or seven cards at a time. Do your chances improve as more cards are taken?
• Extra: Probabilities can change your strategies for playing a card game. Can you design an experiment to show how probabilities can help you choose cards and win "Go Fish"? What about other popular card games? Can you invent your own game based on probabilities?

Mathematicians measure probability by counting and using some very basic math, like addition and division. For example, you can add up the number of spades in a complete deck (13) and divide this by the total number of cards in the deck (52) to get the probability of randomly drawing a spade: 13 in 52, or 25 percent. If you were investigating red cards, kings or the queen of hearts, the odds of randomly drawing one of these from a complete deck are 50 percent (26 in 52); about 7.7 percent (four in 52); or about 1.9 percent (one in 52), respectively. This is why, on average (when done over enough trials), it is easier to draw a red card than a spade, a spade than a king, and a king than the queen of hearts. As you draw cards from a deck, the odds of finding your card change. For example, if you are looking for a spade and do not get it on your first draw, there are still 13 spades in the deck but the deck now holds only 51 cards, so your odds of drawing a spade on the second draw are 13 in 51, or about 25.5 percent. This may not seem like much of an improvement, but with every draw the odds continue to increase.

"Well, chief, I acknowledge you have brought me to a stand still. Hereafter I will do the square thing."


1797: the U.S. Navy frigate Constitution is launched in Boston harbor. During the War of 1812 it is given the nickname of "Old Ironsides" when people witness a cannon ball bouncing off its side.
1849: The first recorded tattooed man, James F. O’Connell, is put on exhibition at the Franklin Theatre in New York City.
1860: William F. "Billy the Kid" Claiborne is born in Yazoo county, Mississippi.
1866: Construction is completed on Ft. Phil Kearny in Wyoming Territory.
1867: The Medicine Lodge (Kansas) Talks take place. Leaders of the Kiowa, Comanche and Kiowa-Apache Indian tribes sign the peace treaty. Comanche Chief Quanah Parker refuses to accept the treaty terms.
1871: “Coal Oil” Jimmy and 2 other men rob a stagecoach near Trinidad, Colorado Territory.
1872: A penitentiary opens in Laramie, Wyoming Territory.
1873: George A. Custer's command arrives in Lincoln, Dakota Territory.
1876: Chief Sitting Bull's camp on the Big Dry River, Montana Territory is attack by Colonel Nelson Miles. 5 Indians are killed and 2 soldiers are wounded.
1878: “Billy the Kid” and 4 accomplices steal 8 horses from the Grzelachowski ranch in New Mexico Territory.
1879: Thomas Edison invents the electric incandescent lamp. It stayed lit for 13-1/2 hours before it burnt out.
1889: A Butte, Montana newspaper reports that a funeral procession became disoriented in thick smelter smoke and somehow ended up in the Centennial Brewery.
1889: William Alexander is convicted of murdering his business partner, David Steadman in Ft. Smith, Arkansas. He is spared from the sentence of hanging by Isaac Parker, ironically given the moniker of "the Hanging Judge." 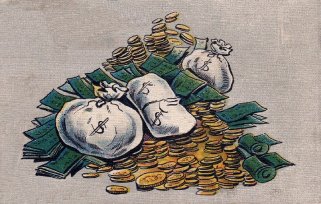