Ed Gaffney: Seattle battleist of of the Soap Gang 1897 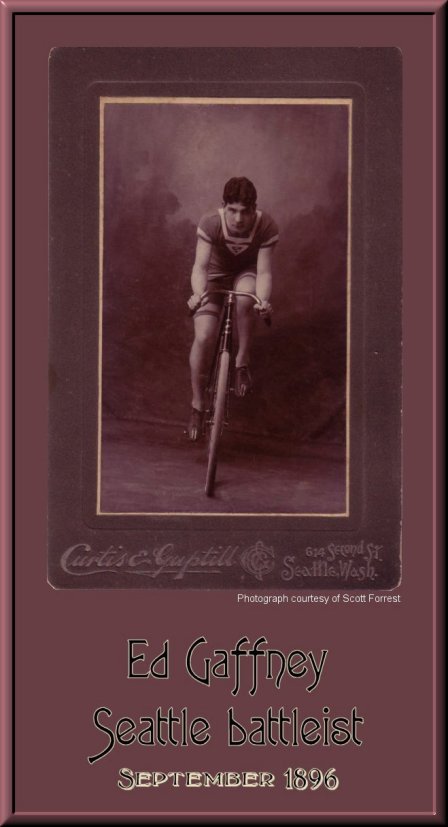 That's Ed Gaffney in the above cabinet card from 1896. Gaffney, a Seattle athlete dangerously tangled with Jimmy Dugan and Soapy Smith and nearly paid for it with his life.

On October 1, 1897 during one of Soapy's numerous visits to Seattle, he and Jimmy Dugan were entertaining themselves in the Horse Shoe Grill Room, a saloon located at 614 Front Street (later became First Street) where they became involved in a sizable affray in which two groups of men began fighting inside the saloon. The Rocky Mountain News of Denver covered the affair.


ROUGH AND TUMBLE FIGHT
——
Jeff Smith and Jimmy Dugan Badly Beaten Up in a Saloon Row.
——

Special to The News. SEATTLE, Wash., Oct. 1. —Jeff Smith, Jimmy Dugan and Elmer Maybury, formerly a Denver sport, engaged in a fight to-night in the Horse's Shoe saloon, during which Maybury was stabbed once in the arm and his clothes cut several times. Ed. Gaffney, a local athlete, who took Maybury's part, narrowly escaped a deadly thrust from Dugan's knife. Smith and Duggan were badly beaten up. An old grudge on the part of Smith toward Maybury was the cause of the row. The saloon floor was covered with blood. A plate glass mirror was broken and guns were in sight all around.

No record of arrests or other details have been located as of yet, but they will someday. I  would have liked to have been a fly on the wall as surely this fight has details not printed in the newspaper.

In December 2009 I published a post about the Horse Shoe saloon brawl and some time later Scott Forrest wrote me stating that he had recently acquired a photo of a cyclist named Ed Gaffney, dated 1896, taken in Seattle. He had found me while search for information on Gaffney on the internet.

I am using Edward Curtis pre-1900 cabinets photos as research for a paper I plan to write this Spring, and found this one on ebay. By 1896, "Curtis and Guptill" were considered the premiere photography studio in Seattle. The biking craze in Seattle started this same year. This particular image has a cyclist on the front with an athletic uniform and an "S" on his shirt. On the back it has written in ink: "Ed Gaffney Sep 9/96". There was an Ed Gaffney who wrestled for the Seattle Athletic Club in the early 1900's and later became a wrestling referee.

This is all I could find on the name "Ed Gaffney" and it's all circumstantial, but makes sense. I did some research on the 'Horseshoe Saloon' mentioned in your article, and I think the Rocky Mountain News got the address wrong - there was a Horseshoe saloon at 614 Front Street (later 1st Ave.).

Interesting stuff - if you ever need any research done in Seattle, let me know and I'll be glad to look around.

How I love getting more details about the people who came in contact with the Soap Gang. It is probably that never never found out who he had tangled with.


Scott is correct about the address. In fact, the complex that held the Horse Shoe saloon is still standing, in the historic district of Seattle (see above).

Thank you very much for everything Scott!