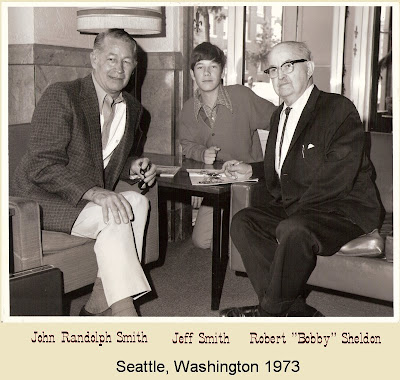 It was in 1973 that I had the pleasure of meeting Robert "Bobby" Sheldon, one of the people who witnessed the death of Soapy.

Bobby Sheldon, a newspaper boy in 1898, remembered Jeff’s body on the wharf:

"He was sprawled out with his Stetson lying there, but nobody dared put his feet together or place his hands over his heart. They didn’t dare show sympathy for fear somebody would pull out a gun."

My parents and I attended the Harriet Pullen auction of Alaskan and Klondike artifacts in Seattle when we met up with author, Howard Clifford who brought down Mr. Sheldon for us to meet. I was only 15 at the time so I don't remember the actual conversation but Sheldon's comments have been recorded.

Robert “Bobby” Sheldon was 90 years old in 1973 when the author and his father, John Randolph Smith, met with him. Sheldon said he witnessed the argument between Smith and Reid and saw Smith point his rifle at Reid, saw Reid grab the barrel with his left hand, and saw Reid reach for his own revolver with his right. This witness also said Smith was the first to fire and that Reid fired 3 shots before both men collapsed on the dock. However, 4 years later when interviewed by Klondike Gold Rush National Historical Park officials, Sheldon changed his story considerably.

"I was about fifty yards away. Mrs. Bert McKenzie, the wife of the engineer on the passenger train, was right near me when she heard the shot. She put her hand on my shoulder and said, “We better be getting out of here and maybe go into the Sylvester building. We don’t know what direction those bullets are going to be going.” But … no other bullets came our way and we didn’t go into the building. But finally after it was all over..."(tape ends)