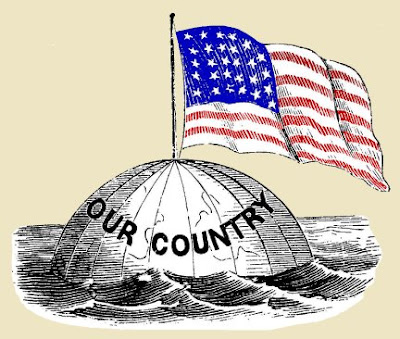 I was recently asked why this blog had so many vintage patriotic pictures and avatars. It was implied that perhaps I was mistakenly painting Soapy as an all-American hero. This person asked that their name and e-mail content be withheld. I respect people's privacy and requests. Sometimes I receive some great stuff but for personal or business reason the sender asks that I not reveal it. This can be very hard to do when the item is a photograph or letter but a promise is a promise. Perhaps others wonder the same question regarding this blogs patriotism so I wrote back to the original sender and asked if they would mind me talking about the topic without using their information. I offered the sender a preview of my post and they consented.
I don't view Soapy as a hero, a very patriotic man yes, but not a "good-guy." In my book it becomes very clear to the reader that Soapy loved his country and its people.

Most of the businesses Soapy operated had U.S. flags and red, white, & blue bunting adorning them. Take a look at the saloon photographs on the main website HERE and you will see that in most instances Soapy's place is the only one with an American flag hoisted. When pointing out Soapy's saloons in photographs via the internet, it is often accompanied by, "it's the building with the flag flying on it."
It has been suggested that perhaps Soapy's display of American symbols was just a ruse to gain the trust of his victims. While this may be an added bonus in his swindles it is not the defining reason by any means. If this were the case then all the symbols would be required to be seen by the victims in point. The fact that many of Soapy's patriotic acts were performed behind closed doors and not shown to the public. For instance the official documents and letters pertaining to the Skaguay Military Company in Skagway, Alaska at the start of the Spanish-American War in 1898. These letters were sent to President McKinley and Governor James Brady of the District of Alaska for official use and not publication which would have done the most good if Soapy was only looking to impress the local citizenry. The Skaguay Military Company was not the only all-volunteer army Soapy created. In 1895-96 he made attempts to create an American Foreign Legion style army for use by Mexico and another one for Cuba before the sinking of the battleship Maine.

Many of the personal letters to and from Soapy in our family collection speak of politics and patriotic endeavors. As bad as one might view Soapy's criminal life, his patriotism has to be looked upon for what it was. The private and public displays of a proud American.

Email ThisBlogThis!Share to TwitterShare to FacebookShare to Pinterest
Labels: Did you know, Interesting correspondence, Misc. Soapy