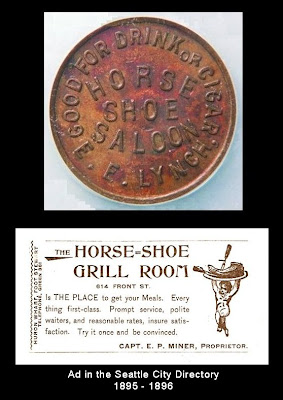 The above token good for one drink or cigar was recently listed on eBay as an item from Seattle, Washington circa 1905. I was interested because it might have come from the same Horse Shoe Saloon known to Soapy while visiting Seattle in the latter part of the 1890s.


The above ad for the Horse Shoe Grill Room located at 614 Front Street in what is now known as Pioneer Square next to the Pioneer Building. It is copied from the 1895-1896 Seattle City Directory. Interesting to note that they had telephone service ("TEL MAIN 115"). 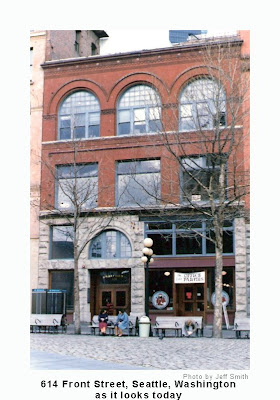 (Click on image to enlarge)
The building as it looks today

Soapy continuously visited Seattle and other cities in Washington. During the Klondike gold rush of 1896-1898 Seattle bustled with activities associated with outfitting and transportation. By night, according to one newspaper headline, it became "a hot town" that catered to the needs of a largely transient population. One of the amusement houses in which Soapy spent his nights was the Horse Shoe Grill Room. This place was to Seattle what the Arcade Saloon was to Denver. In fact a letter to Soapy from John Murphy, possibly the same former owner of Murphy's Exchange in Denver, came "care Horse Shoe Saloon." At this time it is not known if the two men are the same, or if he was perhaps connected to the Horse Shoe in a proprietary way.


On October 1, 1897 during one of Soapy's visits he became involved in a sizable affray when two groups of men began fighting inside the saloon. The Rocky Mountain News of Denver covered the affair.

Jeff Smith and Jimmy Dugan Badly Beaten Up in a Saloon Row.

Special to The News. SEATTLE, Wash., Oct. 1. —Jeff Smith, Jimmy Dugan and Elmer Maybury, formerly a Denver sport, engaged in a fight to-night in the Horse's Shoe saloon, during which Maybury was stabbed once in the arm and his clothes cut several times. Ed. Gaffney, a local athlete, who took Maybury's part, narrowly escaped a deadly thrust from Dugan's knife. Smith and Duggan were badly beaten up. An old grudge on the part of Smith toward Maybury was the cause of the row. The saloon floor was covered with blood. A plate glass mirror was broken and guns were in sight all around.


No record of arrests or other details have been found...yet. Man, would I liked to have been a fly on the wall for that one as surely this fight was more than what was printed in the newspapers.