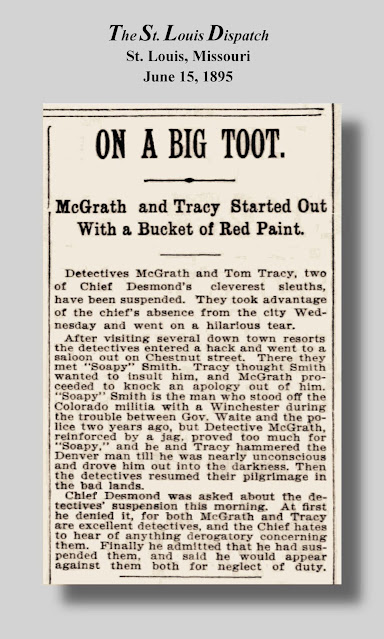 N A BIG TOOT
June 12, 1895 Soapy is overpowered and beaten by two detectives. It is published in the St. Louis Dispatch on June 15, 1895. Below is the transcribed text of the article.

BIG TOOT.
—
McGrath and Tracy Started Out With a Bucket of Red Paint.
—
Detectives McGrath and Tom Tracy, two of Chief Desmond’s cleverest sleuths, have been suspended. They took advantage of the chief’s absence from the city Wednesday and went on a hilarious tear.
After visiting several down town resorts the detectives entered a hack and went to the saloon out on chestnut street. There they met “Soapy” Smith. Tracy thought Smith wanted to insult him, and McGrath proceeded to knock an apology out of him. “Soapy” Smith is the man who stood off the Colorado militia with a Winchester during the trouble between Gov. Waite and the police two years ago, but Detective McGrath, reinforced by a jag, proved too much for “Soapy,” and he and Tracy hammered the Denver man till he was nearly unconscious and drove him out into the darkness. Then the detectives resumed their pilgrimage in the bad lands.
Chief Desmond was asked about the detectives’ suspension this morning. At first he denied it, for both McGrath and Tracy are excellent detectives, and the Chief hates to hear of anything derogatory concerning them. Finally he admitted that he suspended them, and said he would appear against them both for neglect of duty.
—

The following comes from Alias Soapy Smith: The Life and Death of a Scoundrel.

In Soapy's telling of the affair, he went to St. Louis when David R. Francis, ex-governor of Missouri, sent for him. Francis was running for senator and wanted Jeff’s help in the election. Perhaps Jeff saw the chance for election spoils in the form of a new territory to run if he could get Francis elected. Moreover, should things go well, Jeff could be with his wife and children again. But things did not go well, not at all. Jeff clipped the St. Louis newspaper story seen above, telling Mary what happened.
According to one St. Louis newspaper, two other detectives also took part in Jeff’s beating, making it four against one, and Jeff received a broken nose. The Denver Evening Post claimed the two detectives were drunk.

The bartender pointed “Soapy” out to them and said he was a bad man from the west. The detectives wanted to gain some notoriety, and approached Smith, saying: “You are ‘Soapy’ Smith, a gun-fighter from Denver, ain’t you?”
“Soapy” acknowledged … their identification, but said he was no fighter. Some words passed, when one of the detectives pulled his revolver from his pocket and struck Smith over the head. The other detective drew his gun, and before “Soapy” could defend himself he was badly beaten. The detectives sent him to police headquarters on the charge of vagrancy, which charge they trumped up against him to save themselves. “Soapy” was so badly hurt that the police surgeon was obliged to dress his wounds.
While this was being done Chief Harrigan came into the office and inquired how Smith got hurt. The detectives said he had resisted arrest and they were obliged to “trim him up.” By some means the chief found out the true state of affairs and asked “Soapy” to bring charges against the detectives for their cruel treatment.
“I thought of that,” said “Soapy,” “but I investigated and found that both men have families depending upon them for support and I decided not to do it.”
The chief insisted, saying that he did not want such men on his force and some one had to make the charges.
“Well, I’ll never make them, and if I am subpoenaed I’ll testify that I started the fight,” said “Soapy.” He left town the next day and the detectives are still on the force.

Why did the detectives attack Jeff? A whispered word from a local crime boss to the police, honest or otherwise, might have been the trigger. That the local newspaper printed Jeff’s alias of “Soapy” is a good indication that his reputation preceded him or was intentionally surfaced by his rivals. No matter the blame, it was enough to keep Jeff from setting up operations in St. Louis.

"He held three aces and a pair of kings and the sharper held the rest of the deck."