THE SHOOTING OF HARRY "SHOTGUN" SMITH 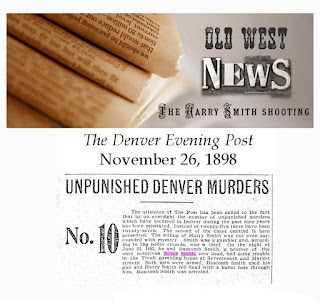 On June 23, 1893, Harry "Shotgun" Smith (no relation) went on a drinking binge and made the deadly mistake of visiting the Tivoli Club and provoking a fight with Bascomb Smith, the younger brother of bad man "Soapy" Smith. Bascomb walked away unscathed. Harry Smith was not so lucky.

On the afternoon of June 23, 1893 Harry Smith purchased a gun from the Solomon pawnshop for $10. About 8:30 that evening, he entered Goldsmith and Wacker’s saloon at 1718 Larimer, already drunk. He spotted Bascomb and Jimmy Blaine at a table in the rear, went up to Bascomb, and said, “I can whip you in any kind of fight.” He then pulled his gun, struck Bascomb on the head, and told him to “draw and shoot.” But Bascomb was not armed. Before Harry could shoot, the bartender and Blaine grabbed him and forcibly removed him to the street. Meanwhile, Bascomb went to his room, retrieved his “big 45-caliber,” and went to the Tivoli Club. A half hour later, Harry came in, asked Soapy the whereabouts of Bascomb, and was told that he was not there. Jeff proposed a drink but then noticed Harry had a pistol in his right trouser pocket. So rather than a drink, Jeff induced Harry to leave. He did, but twenty minutes later he returned to find Bascomb standing at the entrance. Harry was verbally abusive while Bascomb tried to reason with him. Frustrated, Harry yelled, “You —. I can meet you at your own game,” and again drew his revolver. But this time Bascomb was ready and had his gun out a moment in advance. Grasping one another, they wrestled into the entrance of the Tivoli. Bascomb fired a shot that entered Harry’s left wrist, forcing him to drop his revolver. Bascomb fired three more shots in rapid succession, two of which “lodged into the right breast just above Harry’s heart, piercing his lungs and exiting through the shoulder.” A bullet that missed hit Fritz Beck, a spectator, taking off a piece of his right ear. Harry fell on his back, his head striking hard on the flagging. Bascomb jumped over Harry and ran up Market Street and into a Chinese laundry. He was followed by Officer Barr, who upon reaching the laundry met Bascomb walking out to surrender, saying, “I shot the man to save my own life.”

Harry Smith and Bascomb went by patrol wagon to city hall, where the police surgeon dressed Harry’s wounds. Growing delirious, Harry started asking for Soapy, and at times he cried out, “If Bascomb was here now, I would fight him. Bring him in.” Soapy came, “spoke to him kindly and the dying man seemed relieved. At times imagining that he had killed Bascomb and then he would cry out, "I got him. I got him.” Harry was taken to St. Luke’s hospital where he died at 11:30 p.m.

According to witnesses, including the editor of The Mercury newspaper, Bascomb was working in the Tivoli Club on 17th and Market Streets, when a drunk Harry Smith walked in looking for trouble. According to to the editor, Bascomb did all he could to stay clear of Harry, but Harry wanted to fight. "When Bascomb could run no further he drew bead [aimed his gun] and that is why he is alive instead of dead." Bascomb was completely exonerated in court on grounds of self-defense but most of Denver's newspapers called it a murder that Bascomb escaped with.

"It was quite warm in the compartment so 'Soapy' undid the buttons of his vest. I was interested to observe that instead of carrying his two guns on his hips, strapped around his waist, as we usually see them these days in the movies, 'Soapy' had a sort of harness around his shoulders. The holsters of his two large Colt revolvers hung under his arms and the butt of each revolver pointed forward, just concealed by the top of his vest. With this contrivance the bad man of the West never reached for his hip, in theatrical fashion, thus advertising to his adversary what was to be expected. Not at all! When 'Soapy' started in action all he had to do was to gently put his hand inside of the upper part of his vest and with one swing the other fellow was 'covered.'"

1683: William Penn signs a friendship treaty with the Lenni Lenape Indians in Pennsylvania.
1835: Cullen Montgomery Baker, notorious Texas and Arkansas desperado is born in Weakley County, Tennessee. It is alleged that he and his gang killed from fifty to several hundred people during the era following the Civil War.
1836: Congress approves the Deposit Act, which contains a provision for turning over surplus federal revenue to the states.
1860: The U.S. Secret Service is created to arrest counterfeiters.
1865: Confederate General and Cherokee Indian chief, Stand Watie, surrenders the last Confederate army at Fort Towson, Oklahoma Territory.
1868: Christopher Sholes receives the patent for the Typewriter.
1877: Jesse Evans, a member of the Murphy-Dolan gang during the Lincoln County War in New Mexico Territory, is acquitted in the murder of Quirrono Fletcher.
1878: John Larn, a lawman-turned-outlaw is lynched in Fort Griffin, Texas by vigilantes. When the vigilantes take possession of Larn, they were not able to release him from his cell, so they shot there.
1880: The Windsor Hotel in Denver, Colorado opens. Leased to Colorado millionaire Horace Tabor, the Windsor is easily the most lavish hostelry in the west.
1883: Charles Earl “Black Bart” Bowles robs the Jackson-Ione stage four miles from Jackson, California. At the conclusion of the robbery he leaves behind an unusual calling card: a poem.
1884: Cherokee Indian outlaw Bluford “Blue Duck” Duck murders a farmer named Samuel Wyrick in the Flint District of the Cherokee Nation. Blue Duck emptied his revolver into Wyrick, reloaded, and then fired again at a boy who was working for Wyrick. Duck then rode over to a neighboring farm and shot at but missed the neighbor. Deputy Marshal Frank Cochran arrested Blue Duck for the murder.
1885: Denver City Council rescinds Soapy Smith’s peddler’s license to sell his prize soap packages.
1893: Bascomb Smith, brother of Soapy Smith, shoots and kills “Shotgun Harry” Smith (no relation) in the Tivoli Club, Denver, Colorado.
1898: The first battle of the Spanish-American War is fought at Las Guasimas. The Cavalry regiments are commanded by Major General Joseph Wheeler, the only Confederate general to be reinstated in the U.S. Army after the Civil War.