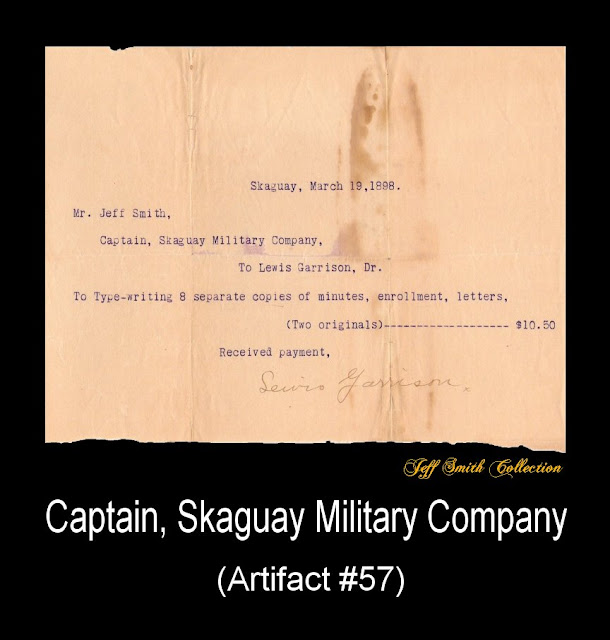 
Not a whole lot to research and explain here. "Soapy" Smith paid Dr. Lewis Garrison $10.50 to type up "8 copies of the minutes, enrollment, letters," for the meeting(s) held for the formation of Soapy's private army, the Skaguay Military Company. The original minutes, enrollment, letters that Soapy had typed up can be seen HERE. Thus far, all I could find on Dr. Garrison is a mention in a story on Skagway, Alaska resident, Peter Winfield Sparks that appeared in the February 28, 2014 edition of the Skagway News.

Winfield Sparks bought property in Skagway as early as 1898, “this indenture made between Christ Ludwig and H.W. Reinhart….according to the plat thereof made by Frank H. Reid, civil engineer, recorded this 19th day of April, signed by Christ Ludwig, witnessed by Paul L. Lovell and Lewis Garrison.


I own one of the original copies, the one sent to Alaska District Governor John G. Brady. Another family member owns another copy. A copy resides with the National Archives. The other five copies are missing. If it still exists, one should reside in the Alaska Governors collection as one copy was sent to Alaska Governor Brady.

General search of blog for "Skaguay Military Company
(Note: there are numerous posts. They are not in any particular order of importance.)

"Even villains are human. You do a good job bringing Soapy's human qualities to life. We all sin and come short of true goodness."

1779: The College of Pennsylvania is renamed the University of Pennsylvania, the first legally recognized university in America.
1839: The American Statistical Association is founded in Boston, Massachusetts.
1862: George Armstrong Custer meets his future bride, Elizabeth Bacon at a Thanksgiving party.
1868: Cheyenne Indian Chief Black Kettle and his wife are killed by troopers led by George Armstrong Custer, despite flying the American flag, during the Washita Massacre.
1885: Fire, starting above the Junction Saloon in Dodge City, Kansas, destroys a block of the business district, including The Junction, the Opera House, the Long Branch and Bob Wright’s store, are gutted. It is rumored that the prohibitionists intentionally set the fire, and while the embers still smoldered, Wright shot three bullets into Mike Sutton’s home, a leader among the anti-saloon crowd. He later claimed that he was firing at a prowler trying to get into Sutton’s house.
1887: U.S. Deputy Marshall Frank Dalton, the oldest of the famous outlaw brothers, is killed in the line of duty near Fort Smith, Arkansas. Dalton and Deputy J. R. Cole went to the Cherokee Nation to arrest Dave Smith on horse stealing. Dalton stepped up to the tent that contained Smith and his cohorts, and was immediately shot by Smith. Deputy Cole returned fire, killing Smith, but was then shot and wounded by one of the other men inside the tent. Cole escaped, believing Dalton was dead. Dalton, however, was still alive, and engaged the outlaws in a short gun battle. One of Smith's cohorts was wounded, and a woman who was in the camp was killed during the crossfire. Frank Dalton was killed by two additional rifle shots by from Will Towerly. One wounded man was captured but Towerly escapes unhurt. Towerly flees to his family's home near Atoka in Indian Territory where he is later killed by lawman Bill Moody.
1889: Curtis P. Brady is issued the first permit to drive an automobile through Central Park in New York City.
1894: A gambler’s petition signed by Denver businessmen starts losing signers when it is learned that famed confidence man Soapy Smith is behind the petition. His response to the Rocky Mountain News is, “I beg to state that I am no gambler. A gambler takes chances with his money, I don’t. I had nothing to do with the businessmen’s petition, and under no circumstances would I sign such a document. Hoping that the clergy will kindly leave me out of that “class…”