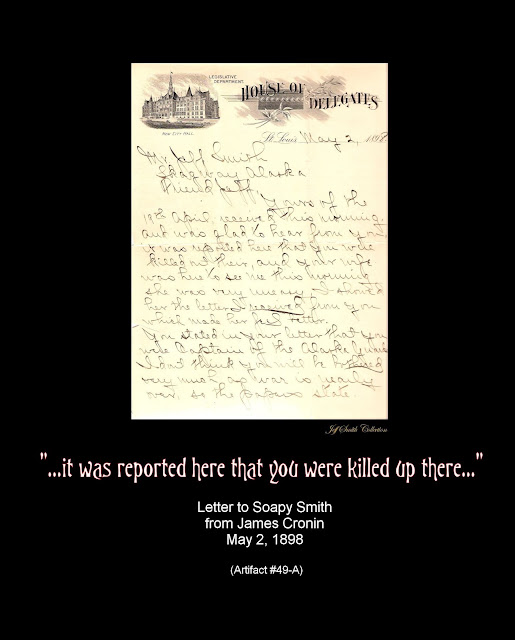 rtifact #49 from my personal collection is a very interesting letter due to a rumor that Soapy Smith was killed in Skagway, Alaska just two months before his actual death. There were several false rumors of his death during his life span, and none of them were due to natural causes. It seems many figured if Soapy was ever going to die, he would not go voluntarily.

Below is direct from my book and includes the deciphered text from the letter. Below that is some additional information regarding the letter. I hope you enjoy it.

At the end of April 1898, a rumor of Jeff’s death circulated in the states and reached Mary in St. Louis before it was dispelled. James H. Cronin of St. Louis, saloon owner and Delegate to the city government, was able to calm Mary’s fears with letters he had received from Jeff dated after his reported death. Cronin wrote to Jeff, on the ornate House of Delegates stationary, on May 2, 1898.

Yours of the 19th April, received this morning, and was glad to hear from you, it was reported here that you were killed up there, and your wife was here to see me this morning. She was very uneasy. I showed her the letter I received from you which made her feel better. You stated in your letter that you were Captain of the Alaska Guards. I don’t think you will be bothered very much as war is nearly over, so the papers state. Jeff if you make more money than you can handle why ship it in to me, I will take good care of it.
Answer this as soon as you receive it as we would like to know how you are. I wrote a letter to you about two weeks ago, I guess you have received it by this time. I remain as ever
Yours most sincerely
Jas. H. Cronin

Jeff had once told Mary, “Never believe I’m dead until you see me in the morgue.” This statement did nothing to ease her apprehension when having to wait weeks for communication from him. The mails as usual were taking a long while. Cronin’s letter was postmarked in St. Louis on the day it was dated, May 2, and was postmarked Skagway on May 16—two weeks later.
Cronin was correct in stating the war would soon end. On May 1, 1898, while Jeff was parading his militia around Skaguay, American Commodore George Dewey was annihilating the Spanish fleet at the battle of Manila Bay in the Philippines, the turning point in the [Spanish-American] war. News of the victory may have eased tensions in the states, but up in Skaguay Jeff did not stop fueling patriotic fervor, and citizens still followed him. 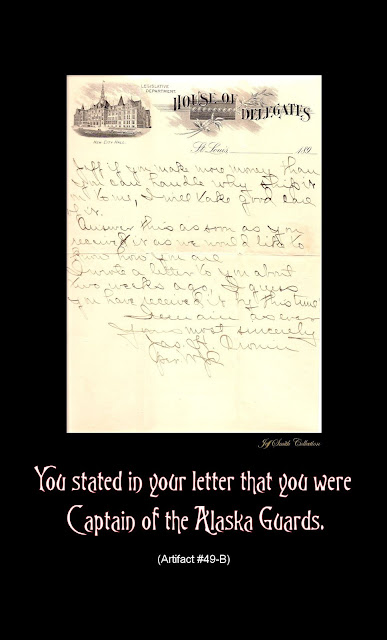 James Cronin was a St. Louis saloon owner turned politician (Democrat). Although he used stationary from the House of Delegates I could not find what office, if any, he may have held in 1898. The envelope, however, is printed with either Cronin's living quarters or one of his saloon addresses, "n.e. corner of 12th and Walnut Streets" [see photo below: Artifact-#49-Envelope-A]. Another saloon mention reads, “Jim Cronin's tavern at 21st and Market Streets in St. Louis” [from Abe Slupsky: an unforgettable character, by Martin Fischer: see here]. From what I could determine from the newspapers, he remained in the saloon business while in office. In April 1901 he was elected Speaker of the House of Delegates [St. Louis Republic, April 7, 1901], but by September the Republic noted him as being the “ex” speaker. Later newspapers list him as "Justice."
I could not find any other major mention of him in other newspapers, but it is obvious the St. Louis Republic did not have a lot of respect for the man.


Genial Jim Cronin was doubtless the most amusing occupant of the Speaker’s chair in the history of local legislation. Cronin was the chief buffoon. The blazing brilliancy of his diamond stud was not the only radiance which shone in those days from the rostrum. There was also the Cronin beaming smile and blithe humor, which transformed the Speaker’s duties into a vaudeville stunt and parliamentary forms into a joke. 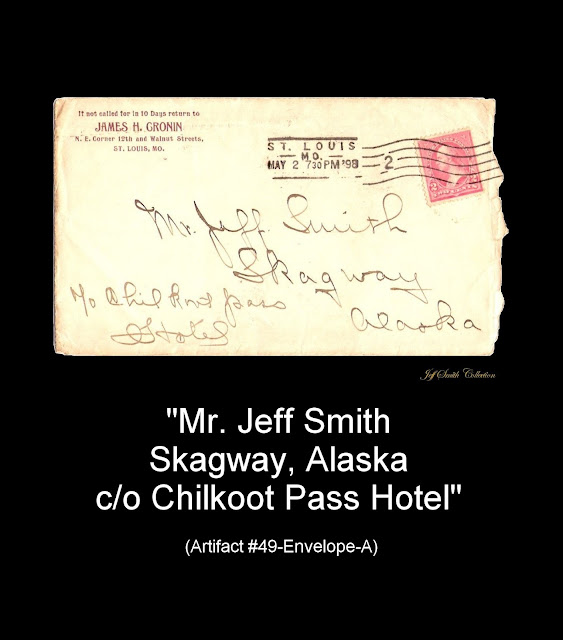 The envelope above shows the Chilkoot Pass Hotel in Skagway as the mailing address for Soapy. He may have lived here for a time, or just paid to use the hotel as a mail center. It is believed that Soapy used several addresses as living quarters, in order to keep victims, the law, and vigilantes from knowing his location other than Jeff Smith's Parlor. Surely, this was to prevent any attempt on his life, which was not unwarranted with several attempts being made during his lifetime. I could not find anything on this hotel but I am including a note to several of the key Skagway historians in hopes of learning something.
The last news article I could find in regards to James Cronin was dated 1904 in which he was mentioned as the brother of Frank Cronin, indicted on charges of running a policy swindle [St. Louis Republic, January 14, 1904]. I could find no more mention of James Cronin from that date onward. 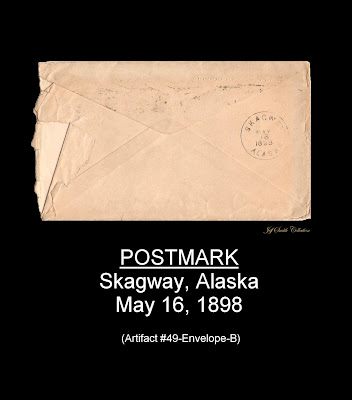 "Soapy" Smith, the autocrat of Skagway, set up an extensive network of spies and confidence men throughout the north that prefigured the secret police systems established by the great dictators of the 20th century."