I spy your little game: a poem 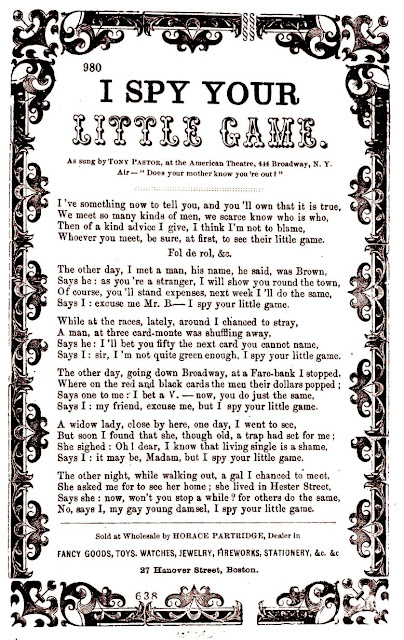 A friend of mine, Sanders, sent me the above piece of poetry. It was obviously published long ago, but is as relevant today as Thanksgiving (happy one by-the-way). My favorite lines are below.


I've something now to tell you, and you'll own that it is true,
We meet so many kinds of men, we scarce know who is who,
Then of a kind advice I give, I think I'm not to blame,
Whoever you meet. be sure, at first to see their little game.
Fol de rol, &c.
The other day, I met a man, his name, he said, was Brown,
Says he: as you're a stranger, I will show you round the town,
Of course, you'll stand espenses, next week I'll do the same,
Says I: excuse me Mr. B— I spy your little game.
While at the races, lately, around I chanced to stray,
A man, at three card-monte was shuffling away,
Says one to me: I bet you fifty the next card you cannot name,
Says I: sir, I'm not quite green enough, I spy your little game.
The other day, going down Broadway, at a Faro-bank I stopped,
Where on the red and black cards the men their dollars popped;
Says one to me: I bet a V.— now, you do just the same,
Says I: my friend, excuse me, but I spy your little game.

"The more I read about Soapy the more it holds that 'truth is often stranger than fiction.' What a complex person he was. The King of the Frontier Con Artist, but at the same time the most generous man in Skagway."


"The book is awesome and you can tell a lot of work went into it. It's a great read!!"

Thank you very much Roger and Christina.