As much as I copy and paste from them, it's little wonder that my favorite blog is the Skagway Historical Society. I have learned so much new information, as well as confirmed much of my own research. Following are some of the interesting tidbits that have been essential in my own research on Soapy Smith.

In my book I published that the first issue of The Skaguay News on October 15, 1897 reported 11 saloons and that at the height of the gold rush the camp held 70 of Alaska's 142 saloons (p. 441). Back on July 6, 2011 The SHS blog listed 82 saloons in Skaguay during the gold rush. It is not known how many of these could have been opened later, or if I need to adjust my books figures. Here is the list. 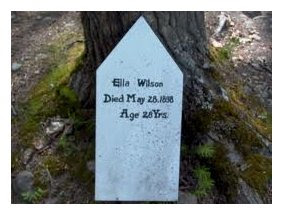 Those who have read my book know about the controversial murder and robbery of the Skagway soiled dove, Ella Wilson and how Denver madam, Mattie Silks, blamed Soapy and U. S. Deputy Marshal Sylvester Taylor for the horrendous deed. My book goes into great detail about everything known about Wilson's death and Silk's later accusations. The facts don't add up that Soapy would murder. To protect criminals who murdered, yes, but to instruct and play out a murder has to be wondered. Marlene McClusky of the SHS blog wrote the following on August 2, 2011.

The New York Times of March 22, 1898 reported that a black prostitute had shot and killed a laboring man at the entrance to her cabin in the saloon district in Skagway. According to the captains of the Alki and the Hueneme the murder started as a result of trouble which began early on Monday evening over the disappearance of the man's watch.

Apparently nothing was done to investigate this, but on May 28, 1898 - only two months later, Ella D. Wilson, a black prostitute or laundress, was strangled in her bed and her belongings stolen. Her house was on Holly Street, the same neighborhood. Perhaps the murder of Ella Wilson was simply retribution or frontier justice for the earlier murder. Although it was widely rumored that she had $3000, it is highly unlikely that a poor black prostitute could have amassed that much money. Even the high priced call girls made little money. Anyway I will check the local newspapers and see if there is a connection....

The last entry actually has nothing to do with Soapy, except to show that he was not the only one taking advantage of people's pocket book. Marlene posted the following on August 4, 2011.

Ok, two more good citizens duped into investing hundreds of dollars in the "Evanston Klondike Gold Mining Company". The so called promoter convinced both George B. Winter Jr., a successful grocer and Dr. Josiah Jones, a physician and surgeon, both of Evanston Illinois to give him the money up front to purchase supplies and set up camp for them. He was also supposed to help them stake gold claims. When they arrived in Alaska, the promoter and their money was no where to be found. Shocking!

Seen above is their camp at Sheep Camp.