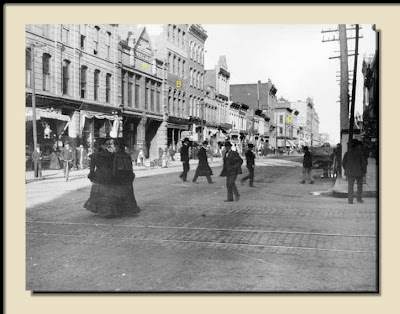 (Click image to enlarge)
The Arcade and Murphy's Exchange
The above photograph shows two of Denver's most notorious saloon and gambling halls of the 1890s. (A) The infamous Arcade Restaurant and Club rooms (saloon and gambling hall) and (B) Murphy's Exchange, aka "the slaughter house," so named for all the deadly violence that occurred there on a regular basis. The first floors were saloons and restaurants while the upper floors, combined together with a stairway, contained the gambling halls. (C) the Chever Block building down the street housed Soapy Smith's second floor office and the short-lived Midway saloon and gaming hall. Making a left at that corner would enable one to visit Soapy's Tivoli Club saloon and gaming den, and just a little further down, his cigar store, which was only a front for "big mitt" (rigged poker) games in a back room.

In 1890 the Arcade was Denver's largest gambling hall, with six to nine faro tables running at any one time. Some historians state Wyatt Earp and Bat Masterson dealt faro there. It is said to have been one of Soapy's favorite places to gamble in. He had numerous violent outbursts while sitting at the faro tables, but it was the beating Soapy and his younger brother Bascomb, administered to Arcade proprietor, John Hughes in 1895 that ended the Soap Gang's reign in Denver.

It was in Murphy's Exchange, located directly next door to the Arcade, that Soapy temporarily placed McGinty, the petrified man on display, and it was in Murphy's where in 1892 Jeff, along with gun-man Jim Jordan, might have shot and killed gambler Cliff Sparks.

A lot more detail on the above information can be had in my book.

Special Note: McGinty still exists! I not only know where, but I believe I know who he was! (shameless plug for my upcoming book).
Posted by Jeff Smith at Sunday, July 05, 2009

Email ThisBlogThis!Share to TwitterShare to FacebookShare to Pinterest
Labels: Denver